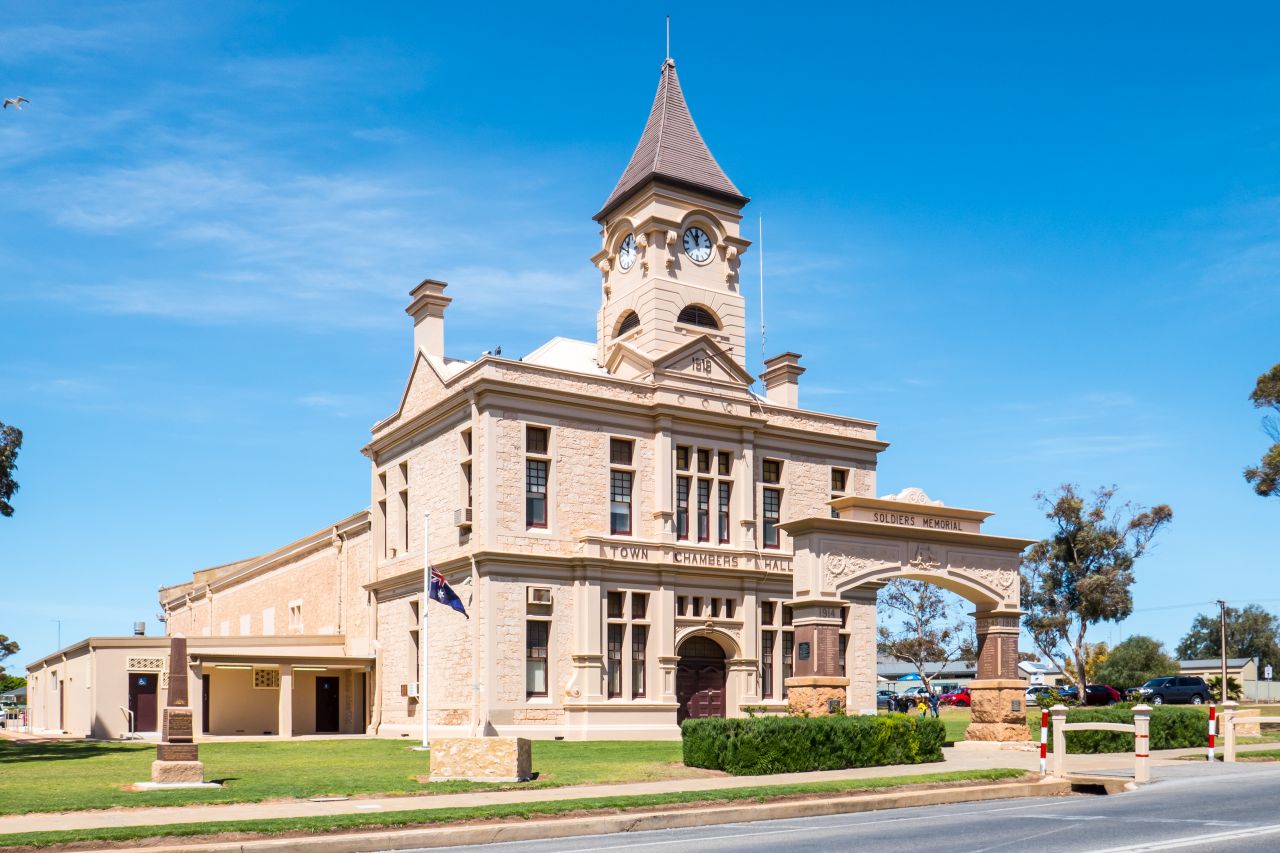 Our membership consists of players from all areas of South Australia, however there are two members who I believe travel the furthest for rehearsals. Linda and Malcolm drive down from the Copper Coast on the Yorke Peninsula most Wednesday’s to attend our rehearsal and have been doing so for many years!

Linda is the bandmaster for the Kadina Wallaroo Moonta Band so after some discussions over dinner one evening, a plan was formed to have a combined concert and a weekend away at Wallaroo. These weekends are great for banding, as not only is it a great weekend getaway, it also helps spread the joy of music throughout regional areas of the state.

Most of our members had decided to head up on the Saturday morning, so it wasn’t uncommon to see friends at each coffee stop along the way! The idea was to meet up at the KWM band room for home made vegetable pasties followed by a rehearsal of some pieces for our next Adelaide Fringe concert in March 2019.

Once we got to the rehearsal room, we were met by a fair few of the KWM bandies and supporters who made us all feel very welcome indeed. The smell of cooking pasties made stomachs rumble and mouths water and so without much further delay, we got stuck in!

Gradually pulling ourselves away from the food, we got setup and ready for the rehearsal. We ran through quite a few pieces for both our next free community Christmas concert as well as the Fringe concert in 2019.

After rehearsal was done – and after the well needed cuppa – it was time to head off to explore the wonderful seaside city of Wallaroo. Some people went for drives, others visited old stomping grounds and some even visited the local watering hole to – presumably – promote the concert (or was it to watch the footy finals perhaps..?).

After a lovely afternoon of relaxation and bountiful cups of tea & coffee, we met at the Coopers Alehouse on the new Marina for dinner and lots of great camaraderie with our fellow bands-people and families. Having eaten way too much food and had way too many laughs, we all retired to our various hotels, motels, caravans and houses, ready for another full day on the Sunday!

Read more about our Sunday concert on Day 2 after a brief photo interlude!

Waking up to the sounds of magpies, pigeons and an occasional scale or tune from the eager bandsperson next door, we made our way out for breakfast. We all had the morning free as the plan for today was to meet up at midday for a joint rehearsal with the KWM band and then have a buffet lunch at the Prince Edward Hotel before heading on stage for the concert.

After a quick bite at one of the local restaurants (McDonalds..) we headed down to the town square where we put our gear in the town hall and wandered out to enjoy the glorious weather. Meeting up with a few other bandspeople, we headed to a cafe for quick coffee and a snack before the main rehearsal kicked off.

The wonderful town hall is a beautiful building, and the interior was no disappointment either. Heading up on stage, we set up and got to business!

After the rehearsal, both bands headed over to the Price Edward Hotel for some mingling and a lovely roast. The trouble with such good food is that you want to go back for seconds. Given the concert was starting in under an hour (and it’s no good to play on a full stomach) it took all our energy to resist!

In a great presentation of showmanship befitting the beautiful town hall interior, the curtains were drawn and we were introduced to the audience by Linda. Unfortunately it was a bittersweet start to the concert as a life member of KWM for well over 40 years had just recently passed away. Carole Dyson had devoted many years of her life to KWM, not only as a player but as secretary – multiple times over the years. Giving thanks and remembrances for her, Linda left the principal chair vacant for the first number in respect and commemoration of her service.

With both KWM and CCB on stage, we combined to play the opening number, a march by Josef Franz Wagner Under the Double Eagle. Introducing us and keeping the concert on track was the lovely Sue Smith. As always, she kept the crowd engaged and entertained by providing snippets of interesting information on a number of our pieces. One such titbit was about our next piece, music from the 1959 classic movie Ben-Hur.

The next set was KWM playing the ever popular tune Heykens’ Serenade, also known as Serenade No.1 Opus 21 by Jonny Heykens. Following this, their lovely rendition of Have You Ever Been Lonely impressed the large audience.

CCB’s Body and Soul came next, played masterfully by Sam Woods on trombone. The audience absolutely loved Sam’s playing with many a comment made during the break.

KWM then played their very own KWM March composed by Sam Trenwith, followed closely by CCB playing Breezin’ Down Broadway. Based on the clapping and foot tapping from the audience, this was clearly a very popular number!

KWM followed us with Louisiana Polka and Just a Closer Walk, with CCB then playing the piece made famous by Dean Martin in 1954, Michael Bublé in 2003 and our very own Flugel player Adam Little in Wallaroo in 2018; Sway.

Closing out the first half of the concert, were KWM playing McNamara’s Band and Some Day my Prince will Come. This piece was composed by Frank Churchill for the 1937 Disney classic Snow White and the Seven Dwarfs. Finally, both bands combined for the wonderfully energetic March of the Cobblers which was one of the very popular pieces used in the soundtrack to the 1996 comedy-drama movie Brassed Off.

Continue reading about the latter half of our concert after the photos!

After a break for tea, coffee and mingling with the audience and KWM members, both bands again took to the stage to pump out the well known and popular march Blaze Away.

CCB then played the Jerry Goldsmith composed theme tune from the 1997 movie Air Force One – apparently in 2016 the Wall Street Journal posted a poll which named Harrison Ford’s James Marshall as the greatest fictional president.

KWM then took to the stage to play Music Music Music which was composed by Stephen Weiss and Bernie Baum. Following this, they played the crowd favourite Chitty Chitty Bang Bang.

CCB’s principal Euphonium player Steve Packer was the next soloist in the spotlight, playing one of the most well known Euphonium solos Grandfather’s Clock. Steve’s rendition left the audience speechless, as he effortlessly navigated his way through the numerous variations on a theme, each one faster and more technically complex than the last.

This was a very hard act to follow, but KWM certainly knew what the audience loved and followed it with the YP March by Sam Trenwith.

In somewhat of a contrast to this, CCB changed the mood and played the 1982 song The Wind Beneath My Wings, again featuring our wonderful soloists Adam Little, Steve Packer and Julie Dorey. Following this, the opening trill from one of the world’s most well known theme tunes rang out – the theme from Mission Impossible.

KWM returned to play Hoop-Dee-Doo and then Consider Yourself – one of the well known songs from the 1960’s West-End and Broadway musical Oliver!.

Coming towards the end of our combined concert, CCB kicked off the toe tapping number A Hard Day’s Night to much applause!

With arms being twisted and gradually succumbing to the shouts of “More!”, we were convinced that we needed two encores to reward the audience for their cries. KWM and CCB both pumped out the wonderfully American march – by the world famous “March King” Sousa – Washington Post, finishing with Barnard Castle to a standing ovation.

These events don’t go off smoothly without hours of effort put in behind the scenes, and this weekend getaway and concert are certainly no exception. There are far too many volunteers to thank individually but each and every one of them gave up hours of their time to organise, host us and welcome us to their community.

Special thanks must go to Linda and Malcolm Kinch for all that they did, especially their tireless work promoting the concert throughout the Kadina, Wallaroo and Moonta communities and our very own Musical Director Peter Smith for his endless organisational and musical skills.

We look forward to continuing this relationship with our fellow band at some stage in the – hopefully not too distant – future.