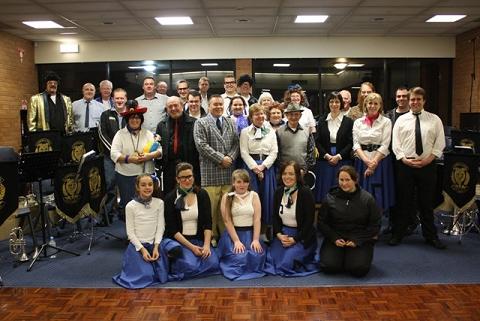 A throng of family and band supporters, together with council representatives filled the Function Centre.  Musical Director Al Kidney chose a varied and entertaining programme.

The concert commenced with ‘Rock Around the Clock’ followed by ‘Blueberry Hill’ arr Denham and then Derek Broadbent’s arrangement of a ‘Buddy’ a medley of Buddy Holly’s more famous songs.

The audience were then entertained by Eric Marshall, Graeme Johnson, Andrew Tucker, Brian Coff, Carol Anderson, Brian Gill, Arthur Tucker, and Chris Hart and the combination made for a lively group that were loosely called ‘Eric and the Misfits’. The group’s composition was made up of members of the Campbelltown Band, Eric Marshall’s Quartet, and members from the Lindy Hip Big Band.

The band resumed with Elton John’s ‘Crocodile Rock’ and ’A Salute to Elvis’ arr Bill Moffit.

After the interval, the band returned with ‘The Beatles Gold’ arr Jan van Kraeydonck and ‘Hit the Road Jack’ arr Frank Bernaerts.

Eric and Misfits returned for a short bracket and then Campbelltown City Band returned for a bracket performing pieces that included ‘Cha Cha for Band’ arr Bill Relton and ‘April in Paris’ arranged by M.D. Al Kidney.

For the concert most members of the band dressed in costumes from the 1950’s Rock ’N Roll era and this included a few Elvis’s for the band as well!. In fact it was Campbelltown City Band’s attention to detail that stole the show.

The band cunningly selected a theme and then easily chose a repertoire of music that was befitting the Rock ’N Roll era. Next they engaged their loyal support base, which included Mayor Simon Brewer and turned the concert into a thoroughly enjoyable evening.