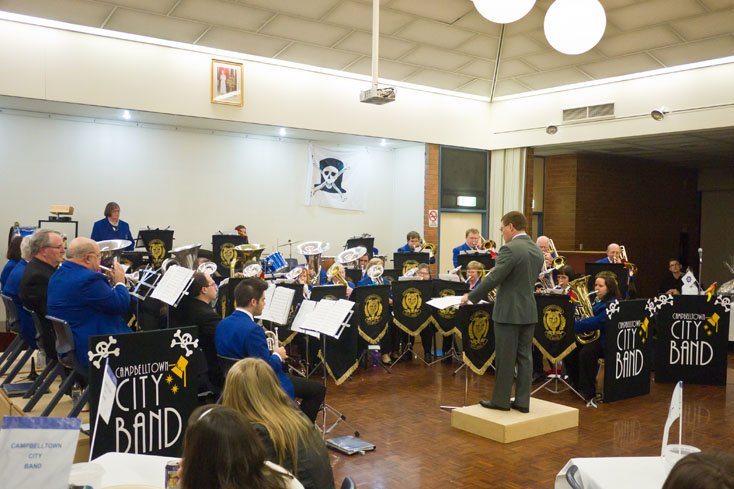 The annual concert of the Campbelltown City Band was designed around a nautical theme but naturally enough this “degenerated” into a pirate theme as there seemed to be a number of musical scores written with this popular theme in mind.

The first part of the programme featured music from the band’s recent success at the Australian National Band Championships held at Easter. The march “Slaidburn” opened the evening, followed by the test piece “Music from Kantara”. Contrary to some choices this test piece actually did have musical appeal to the general audience and was well received. This was followed by the hymn “I Know Thou Art Mine”.

After a band breather ably filled by the vocal quartet “3 Tarts & a Diva” from the Marion Band, Campbelltown continued with their Own Choice “The Kingdom Triumphant”. The march “Heart of Oak” then concluded the first half of the evening.

The interval was an ideal time for band members and their guests to socialise over fine food and drinks – an important part of the evenings programme.

The second half had the advertised nautical flavour and included “Life on the Ocean Wave” followed by the potentially most difficult piece of the evening being “The Pirates of Penzance” by Arthur Sullivan, arranged by Denis Wright. It was certainly the longest running for some 11 minutes. One of the more challenging pieces was the suite “Of Sailors and Whales” arranged by our Musical Director Al Kidney in which some of the band members provided a vocal feature to a soft ensemble accompaniment. Thankfully the Marion singers assisted so all was not lost. “Rule Britannia” got into the programme somehow but it seemed too short a version for some of the audience who wanted to continue flag waving and singing after the band had stopped. Fancy the audience wanting more! The evening concluded with a rousing rendition of “Pirates of the Caribbean” during which Al tried to conduct with toy cutlasses. Apparently they might have proved more useful for certain inadvertent “soloists” during the evening.

Even though the band was still recovering after the rehearsal stress of the Nationals the concert evening was a great success with new music being learned in record time. This had been a lot of hard work but it was a lot of fun too. Hearty thanks must go to Al Kidney for encouraging and inspiring us all to reach personal playing levels we didn’t know we could achieve. Hard work for us but I’m sure it was a lot harder for Al.

Congratulations must also go to the hard working team who arranged the table and room decorations and the myriad of administrative matters, and the team of hard workers who transported all the heavy gear to and from the venue.

Part of “The Viking”

Part of “The Pirates of Penzance”