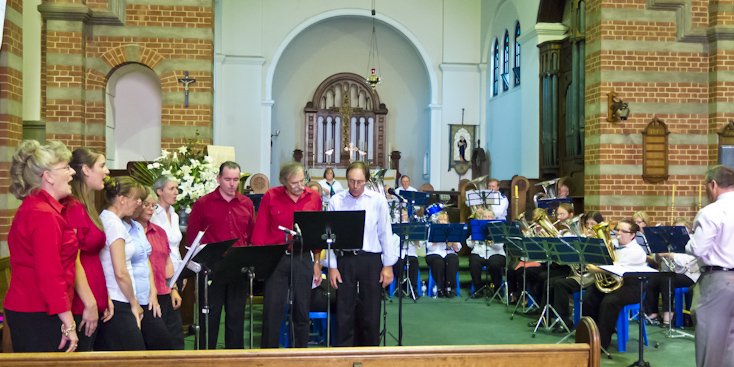 Campbelltown City Band joined forces with the Holdfast Bay vocal group “Harmony In My Head” to put on a one hour concert as a tribute to the Australian armed forces personnel. While not specifically billed as an Anzac concert, the music was unashamedly patriotic Australian rather than commemorating any particular era or theatre of conflict.

The programme was developed by Al Kidney, Director of Music of Campbelltown in cooperation with Claire Behan, the director of “Harmony In My Head”. The band bracket included such favourites as Waltzing Matilda, the RSL march For Crown and Country, and the Kenneth Alford march The Great Little Army. A specially written adaption by Al Kidney of popular Australian themes in Aussie Medley included snippets from Neighbours, Bound for South Australia, Happy Little Vegemites, and Aeroplane Jelly was particularly well received. Australian – Yes! Anzac Day – No!

I must admit I didn’t make a note of the items sung by the vocalists as being a player in the band I didn’t come ready to write notes but enjoyed the experience of just listening to the fine close harmony of the group. I do know that their rendition of Two Little Boys tugged at my heart strings.

The two groups then combined for My Country and I Still Call Australia Home in which the audience were encouraged to sing along.

This concert was not a fund raising event, being entry by gold coin donation, but rather to enable the band to play under concert conditions in the different acoustic environment of a fully carpeted church.