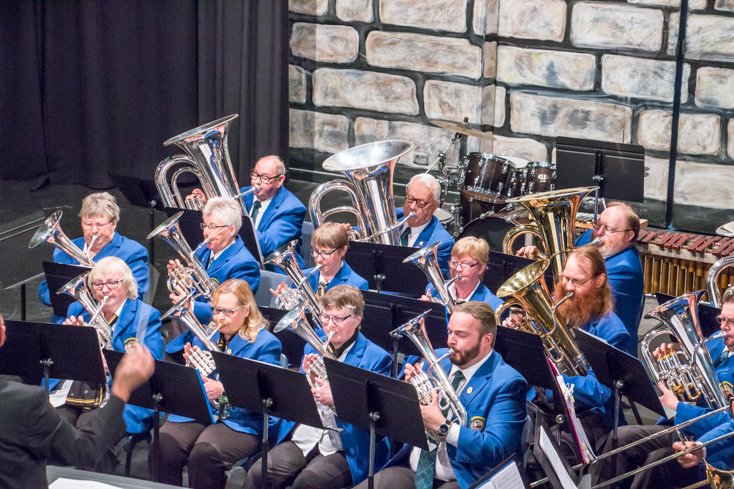 By Campbelltown City BandAugust 21, 2017No Comments

At 8am Sunday morning the 20th August 2017, Campbelltown City Band members congregated at Immanuel College for the annual state band championships.  After a few coffees to settle the nerves, we arrived at the warm up room to sign on – fortunately the room was a warm up not just in name!

Once on stage, we commenced our set with our chosen hymn ‘Colne‘ by Thomas Rive.  Following a rather long pause, the adjudicator’s bell rang and we were into the set test piece.

For D grade, the piece was ‘Partita‘ by Edward Gregson. Written in 1971, it has aged well – a lovely piece to play as well as – more importantly – listen to.  The Programme Note written by the composer states:

“The musical thread that runs through the work is the 13th century plainsong Dies Irae from the Requiem Mass. This gives the work a rather sombre tone which is audible right from the start of its first movement Intrada. The initial hammer-like chords of the opening and conclusion are only interrupted momentarily by a more lyrical modal tune. Even here, on its repetition, it is surrounded by more insistent textural patterns.

The second movement, Chorale and Variations, uses the Dies Irae as the basis for an extended melody in the manner of a baroque sarabande. The five variations that follow are varied in texture, tempi, and dynamics. The final March is more optimistic in mood and presents as its main idea a rather jaunty theme which gets developed throughout the movement. However, the ominous presence of the Dies Irae has the last say with a final statement to round off the work.” – Edward Gregson

Concluding our set was the stage march ‘Emblem of the Army‘ by Arthur Gullidge.

Within 25 minutes we were off the stage and onto the celebratory coffee, before heading inside to listen to the other bands in the higher grades.  Due to the inclement weather, the mandatory marching competition was cancelled.  A huge disappointment for some, and an even larger relief for others!

Results were pulled forward to 2.45pm and after a brief speech by both the Concert and Brass Band adjudicators the moment all bands were waiting for arrived!

Although we were the only competitors in the D-Grade Championships our results were on a par with some of the C grade bands.  Well done to all.

Thanks to Robbie ‘The Roadie’ Cowley for most of these photos.