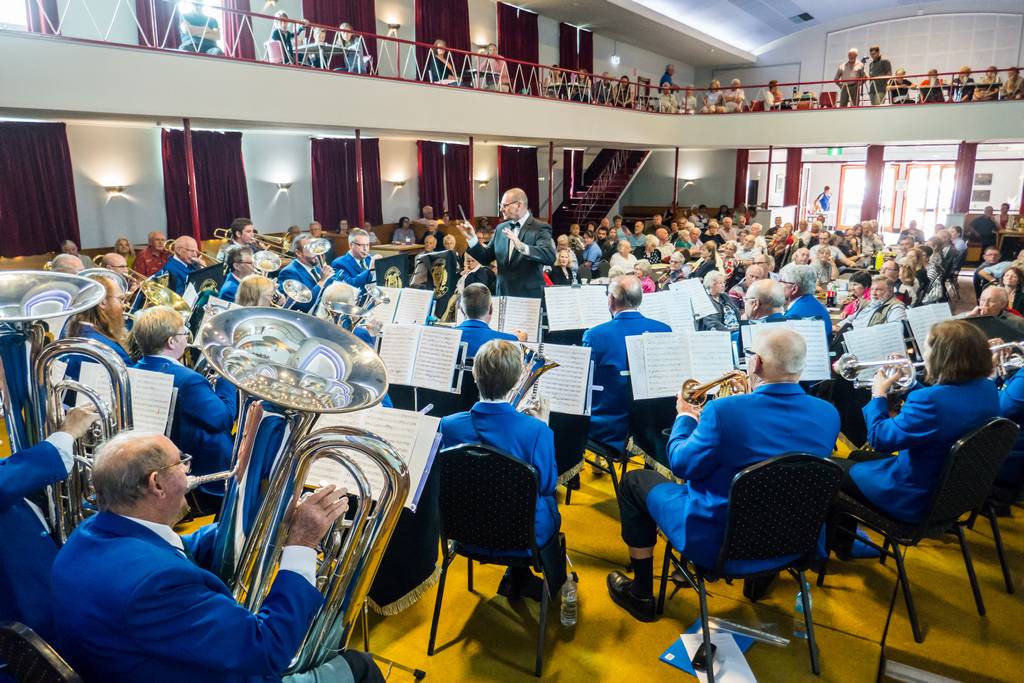 A Class of Brass

After months of preparation in both rehearsing music and organising logistics, our inaugural Adelaide Fringe concert was upon us.  Having sold around 70 tickets online, we were cautiously optimistic in hitting the 120 mark through the door of the beautiful Burnside Ballroom.  Little did we know that we had severely underestimated the number of seats we’d need to put out!

Watching the audience continue to stream in through the doors even after the ground floor was packed out, our helpers scrambled to set up more tables upstairs on the balcony – eventually having both floors packed!

The energy in room was palpable – as soon as the clock hit 2pm the baton was down and the trombones’ opening notes in Rocky’s ‘Gonna Fly Now‘ rang out.  Continuing with the rock beat, the band moved onto ‘The Eve of the War‘ from the Jeff Wayne musical ‘The War of the Worlds’.

Our comperes for the afternoon were Sue Smith and Viv Little, who introduced the next piece ‘Con Te Partirò‘ played by our amazing flugel player Adam Little.  With the closing note ringing in the ballroom the applause continued for quite some time.

The next pieces were ‘Grease‘ – a medley of songs from the musical of the same name – and ‘Beethoven’s Romance‘.

‘The Acrobat‘ was our next song, played by our spectacular trombonist Sam Woods.  This piece was made popular in recent memory by ‘The Acrobat Challenge’ in which players played it and raised money for a trombonist in the UK by the name of Stephen Sykes who is suffering from Hodgkins Lymphoma.  Sam’s rendition left the audience cheering and clapping for what seemed like ages.

‘Love Changes Everything‘ and ‘Swing Low, Sweet Chariot‘ followed soon after, with the interval arriving to loud applause throughout the ballroom.

Kicking off the second half of our concert was ‘Gundagi Groove‘ – an Graham Lloyd arranged twist on the classic Gundagi tune.

‘This is My Story‘ was next, starring our principal cornet player Gary Boland.  This piece was played superbly by Gary, leaving the audience clapping and shouting for more.

Not willing to disappoint, we moved swiftly onto ‘Beauty and the Beast‘ starring our Euphonium and Baritone sections.  Following this was ‘Music For a Darkened Theatre‘ – a medley of music from the film scores of Danny Elfman.

In one of our previous concerts, our principal Euphonium player Steve Packer played Grandfather’s Clock at a ridiculous speed – note perfect!  This time around, he beautifully played a slow and melodic piece called ‘Rainy Days and Mondays‘ to a rapturous audience.

Our final two pieces – prior to the encore of course! – were ‘Schindler’s List‘ and the theme music from the popular TV show ‘Game of Thrones‘.

With the audience’s shouts of ‘more!’ and ‘encore!’ we of course couldn’t disappoint, finishing the amazing afternoon with ‘Él es el Señor‘.

Thank you to all the helpers and people who put in the hours to make this such a successful – and enjoyable – afternoon!