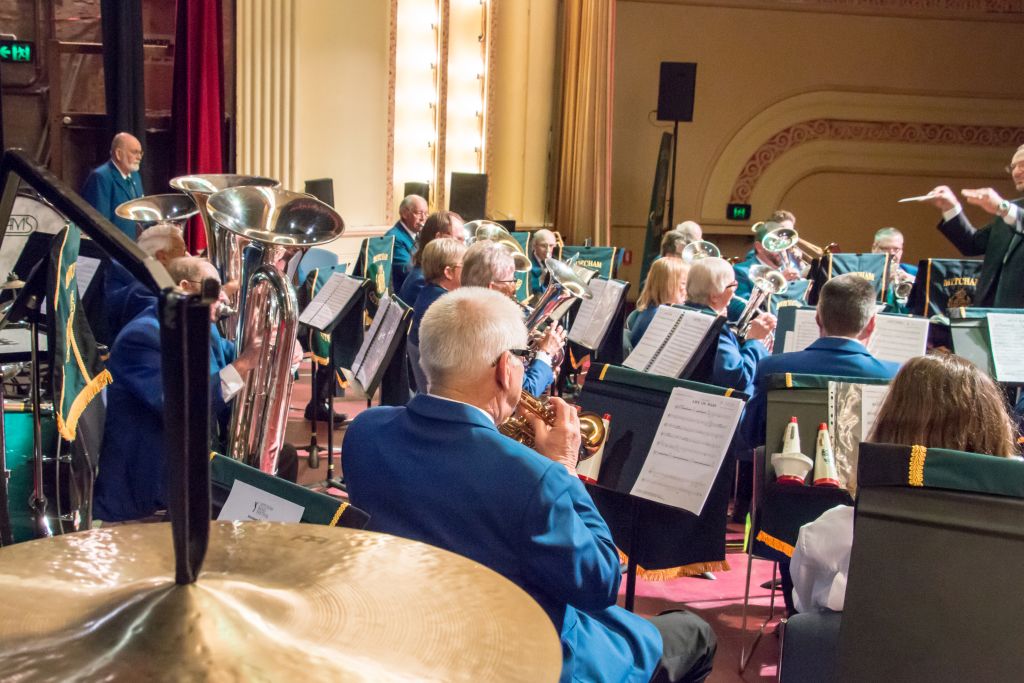 Mitcham City Band’s Festival started in 2017 to great success and 14 bands.  2018’s Festival was even bigger and better than last year, with the festival being held Friday night and all day Saturday in order to provide ample time for all interested bands to perform.  Held again at the Vogue Theatre at Kingswood, it provided a lovely venue to wow the audience with 40-45 minute programs of each band.

Managing the Festival containing 16 bands over the 2 days takes a huge effort and the Mitcham City Band should be commended on a very well organised event.

Upon arriving at the warm up room, Steve Packer – musical director of Mitcham City Band as well as our principal Euphonium – welcomed the band and reminded everyone that this was not a competition, but a festival to celebrate music and banding in South Australia.

Wandering up the – somewhat steep – stairs to the stage, the atmosphere in the theatre felt amazing- the newly unveiled original Art Deco trim around the theatre being caught in the spotlights that were suddenly upon us.  Kicking off our concert with the Midway March from the 1976 movie Midway, the steady and noble beat reverberated around the theatre.

Our compere for the evening was Viv Little who introduced the next piece, David Bowie’s Life on Mars.  The always popular theme from Game of Thrones was next with the melody alternating between cornets, horns and euphoniums and lower brass.  In stark contrast, Robbie Williams’ song Angels followed, with the solo played by Adam Little on Flugel.

When the Rain Begins to Fall was our next song, made famous by singers Jermaine Jackson and Pia Zadora in the 1984 “classic” movie Voyage of the Rock Aliens..

Our principal cornet Gary Boland was the next soloist we featured, with a laid back and beautiful rendition of the 1930’s jazz piece Body and Soul.  Gary performed this stunning piece completely from memory – something the audience certainly appreciated based on their applause.

Gary’s performance was hard to follow, however Michael Jackson’s famous 1984 hit Thriller hit the mark, with the engine room of the band – the tubas – pumping out a strong beat.

Wind Beneath My Wings and the ever popular A Hard Day’s Night rounded off our 45 minute set.

Thanks again to the Mitcham City Band for another very successful festival – one which we hope continues to achieve bigger and better things in the years to come.