Hymns of Praise – Fundraising for the Athelstone CFS

Following our usual attendance at the Australia Day Campbelltown Council ceremonies, the first concert for 2020 was Hymns of Praise in All Souls’ Anglican Church, billed as “an afternoon of hymns, sacred music and some popular tunes you never thought you would hear played by a brass band in an Anglican church”.

After the horrific devastation caused by the recent bush fires it was decided that all proceeds would support the Athelstone CFS and, thanks to the generosity of our audience, we raised over $1,500. We hope that this serves as a small token of our appreciation of the selfless bravery and dedication of our volunteer fire fighters.

Rehearsal time had been limited, but it’s hard to play badly in such beautiful surroundings with magnificent acoustics. The Lost Chord and Love Divine, played by Bb tuba/ church organist virtuoso Brenton Brockhouse, showed just how magical a combination of brass band and organ can be.

The remaining music played was, as promised, a mixture of up-beat and contemplative numbers, interspersed with solos from Julie Dorey, Wayne Jackson, Steve Packer and Adam Little. The audience loved our 250th birthday version of Beethoven’s Ode to Joy and managed to resist the temptation to conga up the aisles in response to I Will Follow Him.

Many thanks to the All Souls’ congregation for providing the venue and afternoon tea. Also, thanks must got to Pauline and Terry Mosel who took all the wonderful photos below. We really appreciate your support.

Christmas Concert – The Spirit of Christmas 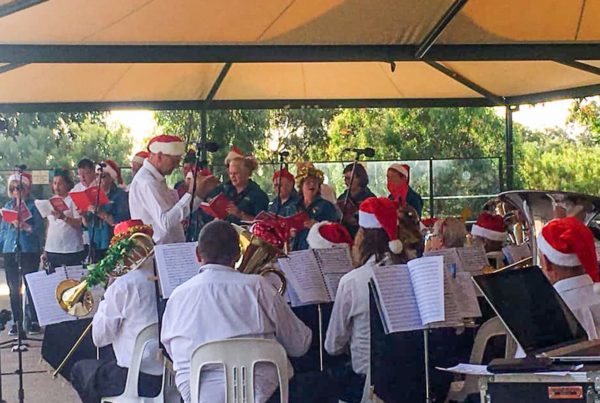