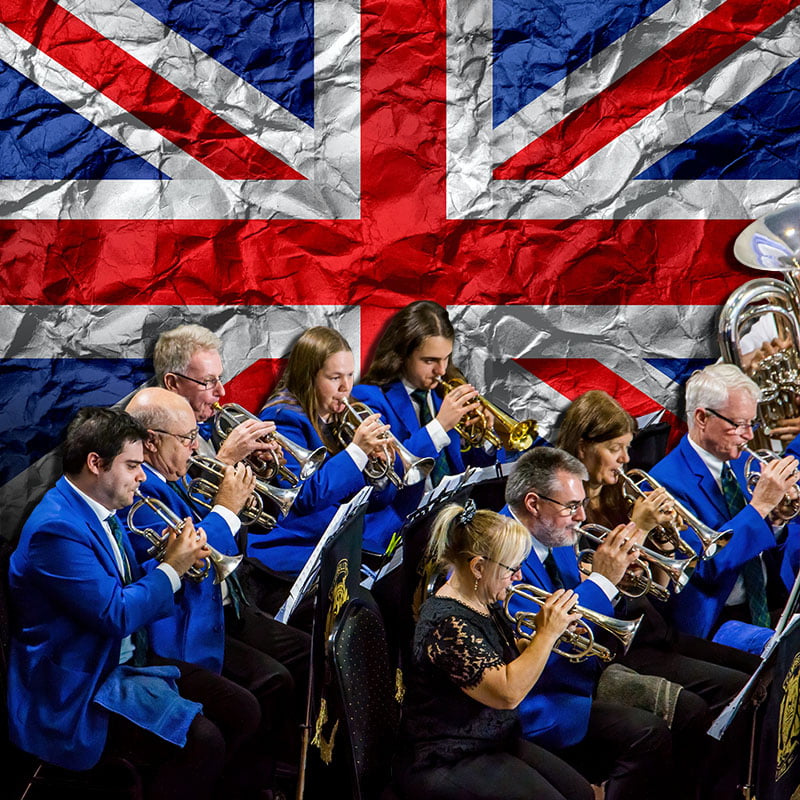 By Campbelltown City BandMarch 31, 2021No Comments

“And the best of British luck!” was probably what most of us were thinking when our eternally optimistic MD Peter Smith produced his programme for the 2021 Fringe. Planning a concert in the middle of a global pandemic with all the problems of social distancing, possible lockdowns and daily horror stories of tragedies overseas required a huge leap of faith but somehow things fell into place and we found ourselves back in Burnside Ballroom. Numbers had to be reduced, but the level of enthusiasm from the audience and players was undiminished.

Brass banding has a long history in the UK and the available repertoire is mind-boggling, but we did our best to do it justice. Everyone loves a stirring march and our opening selection of Famous British Marches, followed by two movements from Sounds of Britain showcased some of the most familiar. Later in the programme Men of Harlech and Standard of St George continued this theme. Folksongs are another important part of British cultural heritage. Julie Dorey’s sweet playing in Skye Boat Song would have been a lovely lullaby for her new granddaughter, as would England’s Scarborough Fair, the haunting Irish Blessing and the beautiful Welsh Myfanwy (another test passed with flying colours by our multilingual compere Sue). To wake us all up again Steve Packer attacked an arrangement of Rule Britannia with his habitual virtuosity. How does he get his fingers to move so quickly? A Beatles medley, selections from Andrew Lloyd-Webber musicals and some James Bond returned us to more modern times.

England is also the home of the world’s most prestigious band competitions. Some of the test pieces chosen for these occasions are equally testing for players and audience, but Philip Sparke’s Triptych has the rare quality of being both challenging and entertaining.

Throughout the afternoon we had noticed many audience members quietly joining in with well known tunes, but an opportunity for full vocal participation came towards the end of the afternoon with Land of Hope and Glory from Elgar’s Pomp and Circumstance March No 1 and Auld Lang Syne. We could have been in the Albert Hall at the last night of the Proms.

A second encore? Of course! Swingin’ Kilts sent everyone home with a smile on their face.

As usual thanks are due to many people. Losing one trombone before a concert may be unfortunate but losing a whole section because of inter-state transfers and work commitments could have been a disaster, so many, many thanks to Stephen Millar, David Banks, Andrew Parkinson and Ian Collins for stepping in so seamlessly. One of our lead cornets, Sam Gallery, was flying planes up in Cairns. Thanks, John Slater, for taking his place. We have a fantastic percussion section, but some of the music we played would have been almost impossible for three players, so we are grateful to Henry Millar for his assistance.

Thanks also to all the behind the scenes helpers, too many to mention individually but essential to an event like this.

And, finally, we have to say farewell to John and Judy Hewson. John has played trombone and more recently baritone for over thirty years and Judy has filled just about every committee position available. She also designed and made a banner for our 150th anniversary which will be used for as long as the band continues to exist. And how will we cope without Aslan, the band mascot? Practices will not be the same without him quietly sitting down and waiting for a pat whenever one of us had a few bars rest. We know it isn’t really goodbye because you will both come to concerts, but you will be missed.