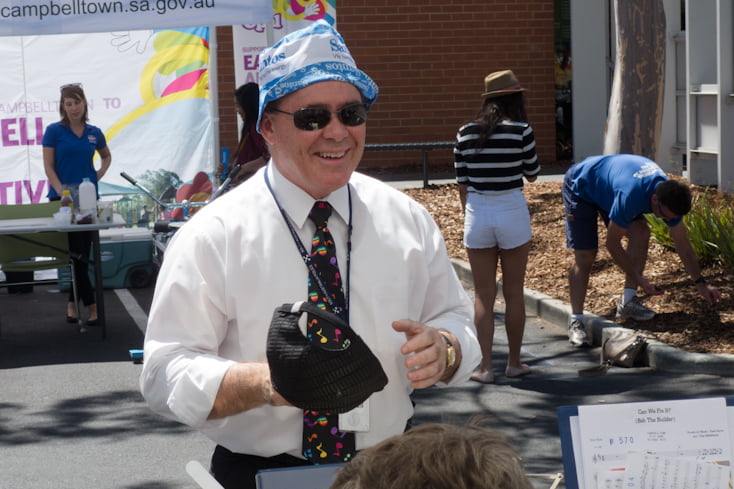 Stage 2 of the 2013 Tour Down Under Championships on Wednesday 23rd January concluded at Rostrevor opposite the Campbelltown Council Chambers. The band had been asked to provide brackets of music from 12noon to around 2:30pm when the races were expected to finish. Neighbouring roads were blocked off from 7am to 7pm so the logistics of getting heavy percussion and tuba gear to and from the venue was quite tricky. Thanks to Kelly, Chris and Robbie for getting the gear on site the previous evening. A lot of players arrived 90 minutes early to ensure parking in streets not blocked off so it was a good time to chat.

The band was situated in amongst the Food and Entertainment Piazza in the Campbelltown Public Library car park and adjacent Anderson Court, featuring renowned Flavours of Campbelltown Food Trail businesses who were selling a wide selection of gourmet food items. There’s nothing quite like that aroma of delicious food cooking mixed with the exhaust fumes from the neighbouring bouncy castle generators. However situated between the food and the children’s activities ensured a steady movement of people tracking past. The band played several brackets of light music until such time as the overhead helicopters drowned out the music and players could not hear the instructions from the MD. The sudden exodus of patrons from this area also signalled the arrival of the cyclists and the start of the official ceremony so the band took an early minute. (Apart from those who had parked nearby whose cars were trapped until festivities closed down later in the day.)

It is sad that this event was the last to be conducted by our retiring MD, Al Kidney who has had to juggle too many different hats in so many bands.