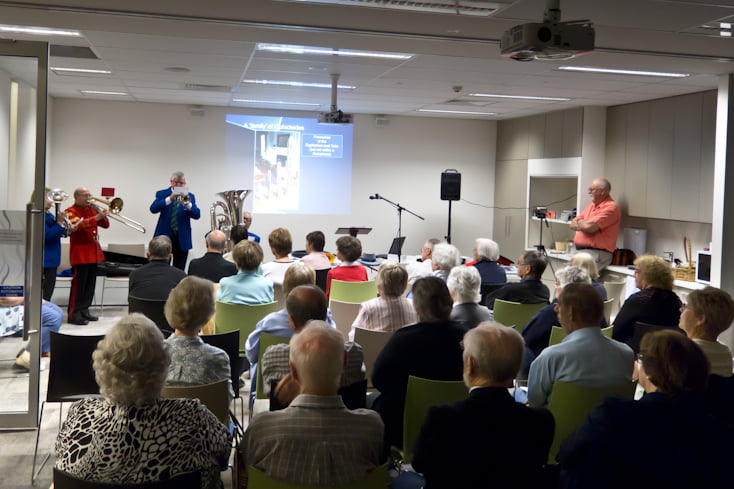 In the middle of last year, Brenton Brockhouse, Past President of the band, was asked to present a history of the Campbelltown City Band to the Campbelltown Historical Society. While some of the band history had been documented a lot of research was required to build up an accurate story for such a select group of knowledgeable Campbelltown historians. The presentation was given on Tuesday 9th April 2013 at the Campbelltown Library.

The resources of the State Library Archives and Newspapers of the day provided much valuable information but it was the stories of past band members that really added authenticity to this research. Whilst “it is believed the band was formed in 1919 by Mr Arthur Hazelwood” there is no primary source material that can be considered “proof”. Newspaper reports up to that date refer to Athelstone Brass Band but from 1920 only activities of the Campbelltown Brass Band are reported.

A history of 94 years is relatively short and encompasses only a few generations so once the word was out that memorabilia was being sought, photos and stories crept out of the woodwork. Many photos from 1930 onwards listed all the players and often read like a “Who’s Who” of the Campbelltown community. And of greater interest was that fact that so many relatives of those people are still in the community and even attended the Historical Society meeting.

Apart from the history of the band, Brenton also included a brief history of the instruments and the rise of the brass band movement during the Industrial Revolution in the UK and the significance of band sponsorship by companies or Councils as in Campbelltown.

A short hymn tune was played by Evan Markwick on cornet, Kaylene Rossi on horn, John Hewson on trombone and Brenton on BB tuba as a demonstration of the harmonious sounds of brass instruments.

Brenton was indebted to Irvine Nicholson, a past player and conductor of the band from the 1950s to 1970s who was able to shed much light on the successes and low periods during those decades and who attended the meeting to add his personal experiences to those found from research. True “living history”. Photos and other information also came from written records of Herb Reid a past Mayor and President of the band, and from an interview with George Charlton prior to his death, and from Alwyn Munchenberg who was in the band in the 1920s and only died aged 104 in 2008.

The History section of these web pages has been re-written in the light of all the new information gleaned because of this simple request to talk to the Society.