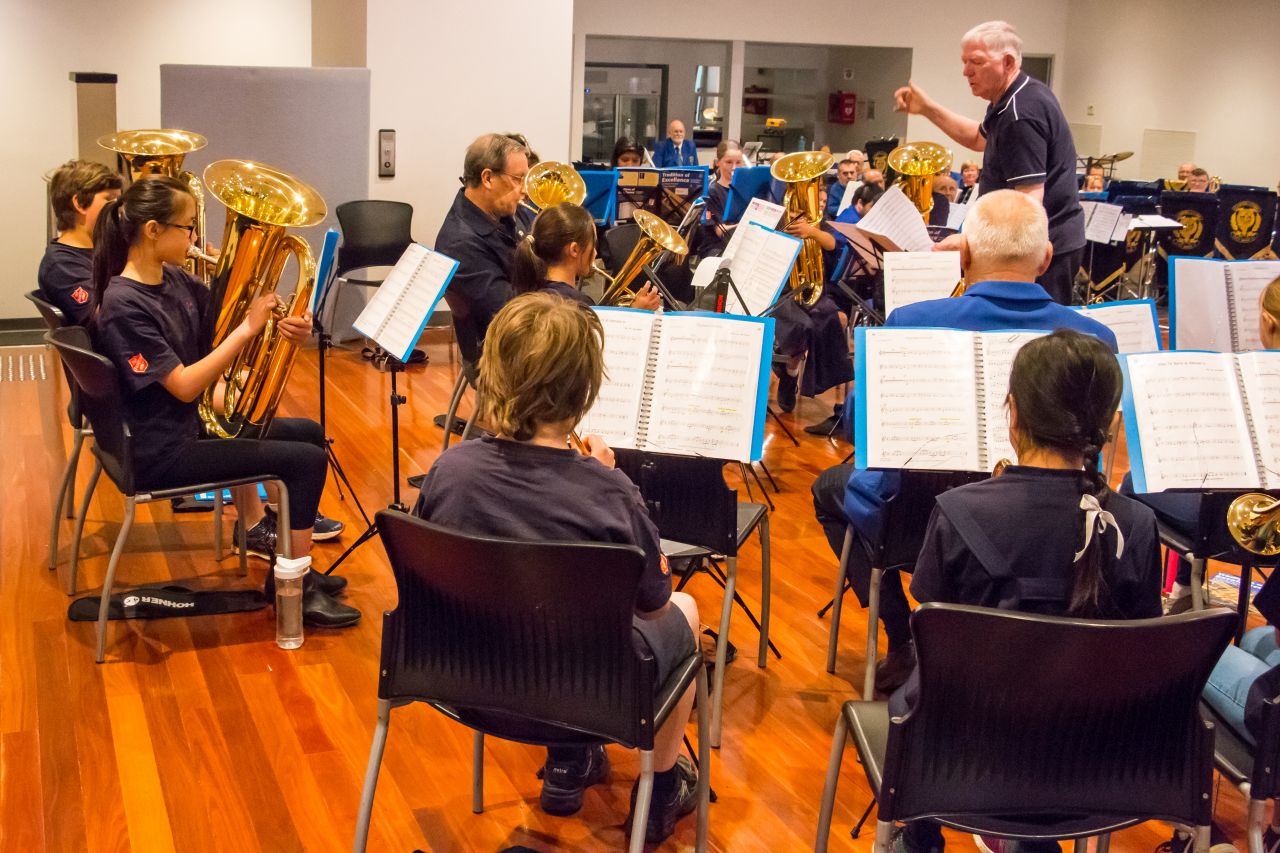 Celebration – An Afternoon with Just Brass

By Campbelltown City BandNovember 12, 2017No Comments

On Sunday the 5th November 2017 we were proud to host a concert with our special guests, the Arndale Salvation Army’s ‘Just Brass’ youth band.  The theme of the concert was ‘Celebration’ where we celebrated all things musical!

Our guests for the afternoon were part of the Just Brass programme.  Started in 2010 by John and David Collinson, the programme arose from a realisation that there was nowhere for young kids connected with the Salvation Army to learn a musical instrument.  After noticing an abundance of spare brass instruments within their local South Barwon corp, they offered up their services and began a programme of tuition to train the local children.  These children attended schools with no resources to invest in music programmes.  Since 2010, the programme has expanded to provide opportunities for over one thousand disadvantaged children in schools spanning multiple states.

Kicking off the afternoon, we played the very energetic Where the Black Hawk Soars arranged by Alwin Kidney. This was specifically arranged for us by Al and was used as one of our winning pieces in the 2016 South Australian D Grade Championships.  The concert – wonderfully compered by Sue Smith – then moved on to the classic Louis Armstrong melody What a Wonderful World starring our own gravelly voiced performer Adam Little on Flugel Horn.

Following this beautiful solo was Jurassic Park then The Veterans played by a cornet trio of Bob Bastin, Colin Smith and Ian Barton.

It was at this moment the Christmas music made an appearance – even before the 2017 Credit Union Christmas Pageant!  The Christmas Song was very well received by the crowd, albeit not with chestnuts roasting, nor open fires..!  Finishing our first half with an age old classic Choral and Rock-Out it was then time for the main event – The Arndale Just Brass Youth Band, conducted by it’s M.D. Cliff Maddigan.

Their first piece of the afternoon was the classical minuet that everyone has heard but nobody knows the name of – Minuet in G major.  As a side note, until the 1970’s it was attributed to J.S. Bach but is now widely recognised that Christian Petzold was the composer.

Their second number – Joshua Fought the Battle of Jericho – was so well played and received by the audience that they request it be played again.  Never one to disappoint an engaged audience, Cliff kicked it off again receiving an even larger amount of applause the second time around!

Finishing their set was a beautifully played piece called Highland Farewell.  Whether this was picked specifically for our concert in Campbelltown or if it was just a lucky coincidence we shall never know!  Either way, it featured the band mimicking bag pipes which I think was the highlight of the afternoon!

With the audience’s loud clapping in our ears, we started the next half with New York, New York and then The Magic of Christmas.  Steve Packer‘s Euphonium solo of Grandfather’s Clock then followed.  This increasingly – and stunningly – fast piece was an outstanding solo performed seemingly effortlessly by Steve with the audience remarking at how fast it was…even when we were only at half the speed of what it would finish on!

The complete opposite end of the scale – musical pun intended – was visited with Ave Verum Corpus being beautifully performed. Hootenanny then followed, with our principal cornet player Gary Boland kicking off with an improvised dixieland jazz solo towards the end!  Finishing our second half was Amparito Roca which was loved by audience and band alike.

The afternoon went way too quickly, with the end of the concert very quickly upon us.  Both bands combined to play See the Conquering Hero Comes as our final piece for the afternoon.  A thoroughly enjoyable concert for all – it was excellent to hear the next generation of brass players and it was our pleasure to host the concert.  Thanks to all who supported both us and the Just Brass Youth Band.